Sharks, dolphins & whales dead ahead! What's it like to be a Catalina Express captain? 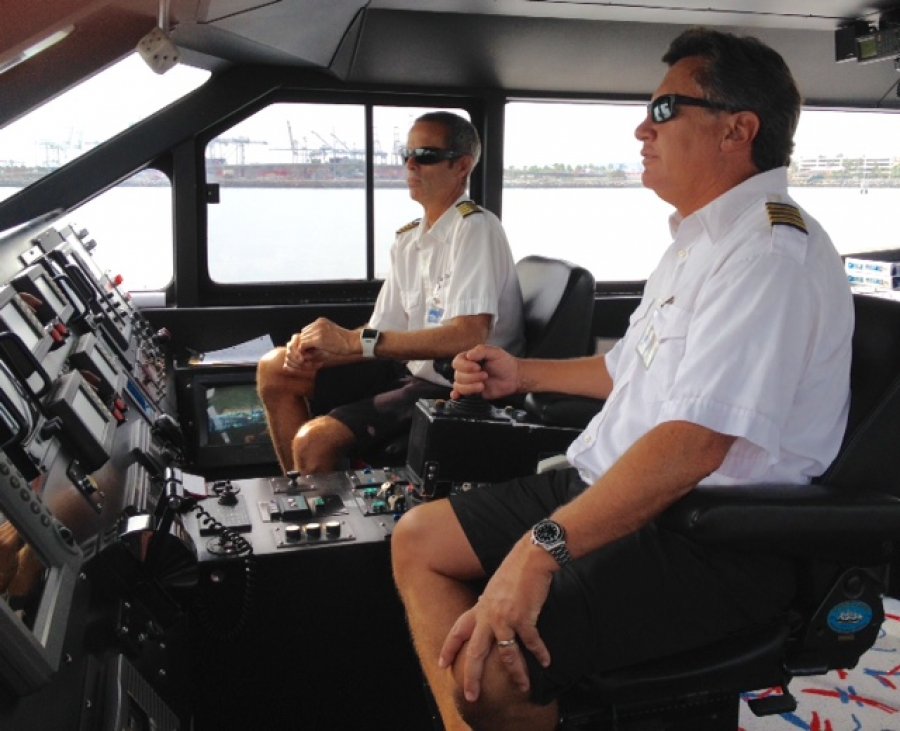 Aboard the Jet Cat Express -- Lazy clouds floated overhead as crew members cast off and the giant catamaran Jet Cat Express slid out of its dock at Catalina Landing in Long Beach. We were headed for the island on a spectacular fall day. Capt. Michael Jackson was at the helm.
I was lucky to be able to join Capt. Mike in the wheelhouse that day. I always thought the view was grand from the second-story Commodore Lounge. But as I ascended to the third-story wheelhouse to meet Jackson, I was surprised to find an even better view -- a 360-degree view -- awaiting.
I slowly spun around, taking in Shoreline Village, the Queen Mary and behind us, Queensway Bridge. Ahead, the water was mirror-smooth; it didn't look much like the Pacific Ocean.
"When you see clouds like these," said Jackson, nodding toward the horizon, "you know it's going to be like glass. And the winds are light, too. It's a perfect day."
Jackson, a Catalina Express captain for 27 years, says he always likes to be proactive about the weather. "But today, well... lakes are rougher than this."
Does he like the job? "It's my passion," he said quickly. "This is a job like no other." And he's captained boats in a lot of places, including Fiji and Saipan.
We headed out through the breakwater and scanned the water. There was little boat traffic and we could easily see the island.  A seal popped to the surface, took a quick look at us, and popped back underwater.
Catalina Express boat crews see all kinds of marine life on their 26-mile jaunt across the channel to Catalina, including a recent sighting of a pod of killer whales.
Hammerhead sharks are one of Jackson's favorites. "I think sharks are the coolest," he said, "especially hammerheads."
Dolphins often shadow the boat, leaping in and out of its wake. Jackson lets passengers know when dolphins and whales and other sea creatures appear so that everyone gets a chance to take a look. Pelicans, cormorants, seagulls and Arctic terns catch a ride on wind currents in the sky overhead.
Occasionally the crew spots an unusual denizen of the deep. For instance, there was the time a periscope popped up on one side of the ferry, Jackson said. "All of a sudden it disappears and appears on the other side of us."
But for the most part, Catalina Express captains and crew members -- there are about 130 ocean-going employees  manning eight high-speed vessels --  see the things those of us ashore miss each day: spectacular sunsets and sunrises, white clouds rolling across a blue sky, humpback whales breaching and giant pods of dolphins leaping across the water.
I wish I had that job.
By Rosemary McClure