Grab some friends and take an artsy-craftsy island tour 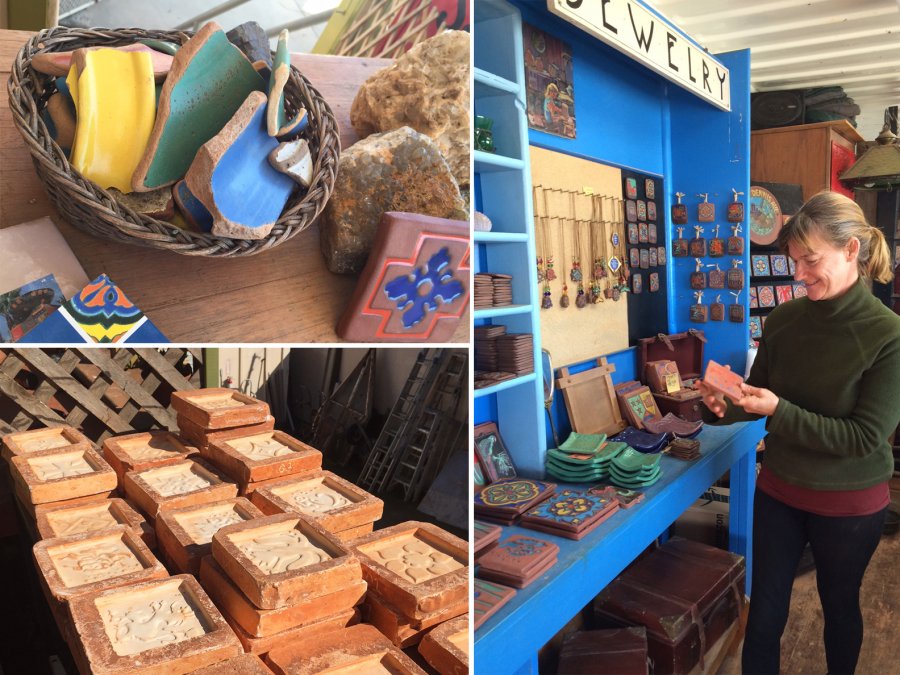 It's a dirty job, but somebody has to do it. And it might as well be me and my friends.
Our task: To turn a lump of brownish-red clay into the colorful ceramic tiles that Catalina has been famous for since the 1930s.

If you've ever visited the Island, you've probably noticed the splashy-looking Catalina tiles. They decorate Avalon's historic buildings, fountains, walls and other structures. There are fish, flowers and geometric shapes; most have an Art Deco vibe and are done in vivid primary colors.

(Don't remember them? Look closely the next time you stroll along the serpentine wall that runs along Crescent Avenue, then check out the fountain at Crescent and Sumner.)

I've always admired the tiles, so I was excited when I had the opportunity to join some friends on an Avalon tour that included making them in an artist's studio.

The tour and tile-making session are the brainchild of Robin Cassidy of Silver Canyon Pottery. Robin, a longtime potter and tile maker, is the person who restores Avalon's decorative tiles when they fall into disrepair. She's also the artist whose Catalina tiles are available at island shops such as the Steamer Trunk and the Catalina Island Museum Store.

We began our tour on a sunny winter day, leaving Long Beach on a Catalina Express ferry at 10 am, then met Robin downtown after lunch. We hopped in her SUV for a 10-minute ride to her studio at Pebbly Beach, where she told us a little about the tiles' history.

Like so much of the Island's backstory, it all started with entrepreneur William Wrigley. As the tale goes, his car got stuck in the mud one day in 1926. On closer inspection, he realized the mud contained a high percentage of clay. Soon thereafter, Catalina Clay Products opened its doors on Pebbly Beach, giving work to islanders and providing beautiful Catalina tile, which helped promote the island's name.

After our little history lesson, we set to work in the studio, which overlooks the beach. We could see the mainland in the distance. A pleasant distraction.

Robin had us don aprons, then we chose our molds, worked our clay, tamped it down -- a fun part of the process since it involves slinging a mallet -- and picked the colors we eventually wanted our tiles to feature.

While the first tile we produced took 15 or 20 minutes, by the third one, we were down to less than five minutes each. Altogether, our afternoon class took about 2 hours. Robin fires the pieces later and ships them to participants.

It's a fun way to get in some artsy-craftsy time while you're on the Island, and end up with custom, professional-looking souvenirs. The classes, Robin says, usually draw families and girlfriend groups. She can accommodate up to 12 people, but most groups are smaller.